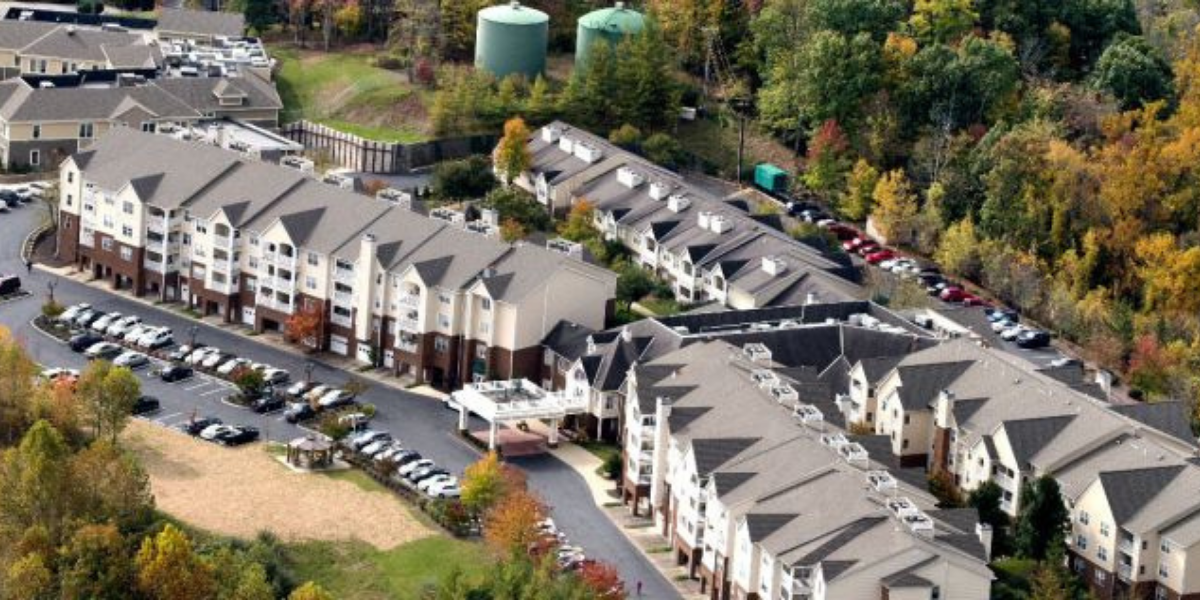 For Edgewood Summit, Executive Director Diane Gouhin’s early reaction was one of the key factors that kept their campus nearly untouched by COVID-19. Since March, the community, managed by Greystone and located in Charleston, West Virginia, has only had two travel-related staff cases where symptoms developed during the employees’ self-isolation period and posed no risk to residents.

When PPE started becoming scarce, Gouhin acted quickly, knowing it was only a matter of time before the disease became more prevalent in the United States and senior living communities.

“In early March, we took it upon ourselves to shut down before we were even advised to do so – that meant that everyone was screened upon entry, we didn’t allow contractors in the building, no group activities or dining, no transportation, and no visitation unless it was a compassionate or end-of-life care case,” Gouhin explained. “Basically everything stopped.”

At that point, Edgewood Summit did what many other communities were beginning to do: adapt their current services – and quickly create new offerings - to reduce physical contact between residents and staff while increasing sanitation in all areas of the campus. Even then, recommendations and guidelines changed daily, which meant Gouhin was asking for even more flexibility from her team.

“As time went on, we learned more about the virus and saw what was happening in other parts of the country,” Gouhin stated. “It became our daily routine to count inventory, check staff for symptoms, and figure out a way to get tests.”

Because West Virginia had such a low number of cases, early access to tests was nearly impossible. In early to mid-April, Gouhin and her team were finally able to partner with a lab and set up a process to test staff. As of July 13, 2020, West Virginia had 2,287 cases per one million people1, well below the national average of 10,058 per one million people2, lending confidence that the state’s recommendations are working.

By sustaining the state-mandated daily percentage of positive cases under 3% for a two-week period, Edgewood Summit’s Phase I re-opening in early June included limited group activities that had five or less residents wearing masks and still maintaining social distancing, and transport for medical appointments and check-ups. Visitation remained limited to compassionate and end-of-life care cases.

“Our exercise classes are still online because those are deemed a high risk,” Gouhin explained. “However, both our fitness center and beauty salon are open by appointment only and with a mandatory mask requirement. Operating by appointment only allows us time to sanitize both spaces between use.”

“We have used an appointment-only basis for both healthcare and independent living residents,” Gouhin said. “We limit how many visitors a resident can have at one time, and all visitors are screened upon entry and required to wear a mask and maintain social distancing.”

Gouhin explained that group activities now have a limit of 10 or less residents, and non-medical transport is allowed. Even the dining room has re-opened in a limited capacity, serving breakfast and lunch by reservation only and featuring a reconfigured layout to increase physical distance between tables.

“Even though our dining room has re-opened, the majority of our residents are still utilizing our delivery service,” Gouhin indicated. “They’re still not super comfortable coming down to dine with others, and we’ve even helped many of them set up grocery delivery or pickup services.”

As with any change in plan, Edgewood Summit’s re-opening has not come without its challenges. Contracted staff, like hospice nurses and therapists, were allowed back on campus in Phase II, but the Edgewood Summit leadership team required that they dedicate themselves to only their campus to mitigate the risk of cross-contamination.

“We have to ensure that they’re not wearing PPE that had been worn elsewhere, so now we insist on watching them sanitize their hands and don our PPE that we know is clean,” Gouhin explained. “We just can’t take anything for granted anymore, so we have to ask the tough questions and, in some cases, change what we require.”

As far as what services and policies will remain in place long-term, Gouhin believes communities will need to have a wider variety of virtual activities and offerings, such as TED talks and virtual museum tours.

“The infection control and sanitation standards will be much higher, and we will keep more supplies on hand,” Gouhin surmised. “Prior to COVID, we maintained about a three-week supply, but we will most likely require two to three times that now because the world has really shrunk from a supply chain perspective.”

If there is a silver lining in all of this, Gouhin says it’s her team, who has risen to the occasion on every level and remained vigilant to ensure safety for everyone. “I knew our culture was strong before this, but to sustain this level since the first week of March is incredible and humbling as a leader,” Gouhin described. “Their commitment has been unwavering, and I am so proud of them.”